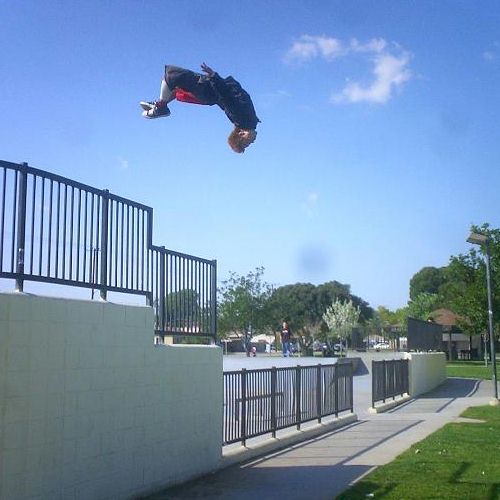 Since Burning Shorts launched one year ago, so much has changed. The Online Video Giant Goo-Tube has emerged, and many similar sites presenting the Raw and Unfiltered continue to trend downward in traffic. Oh, yes, nearly everyone with a site, especially Hollywood Major Studios (and their many networks), has declared entry into this medium, though we have yet to see a single successful online video site emerge from Old Hollywood.

During the very same time, Burning Shorts, thanks to you, has trended generally and steeply upward.

Also during this year, we have connected with two of the artists who we were honored to present in our very first Issue: Ryan Wood of Dangerously Adorable Productions, Inc., creator/writer/director of “Fear of Girls” and Sarith Azuma now known as Xin Sarith Azuma Phan Wuku, creator/star of “Urban Ninja for Hire” pictured above displaying the spirit appropriate for online video achievement.

What has not changed in the year is the enduring brilliance of these works and the artistic expansion of their creators. To us, this is thrilling: “Content is King”, and quality content lives on and on.

Wood, now our cherished colleague, and one particularly savvy Hollywood Studio have allied for soon-to-be premiere release online “Fear of Girls 2”. With “FoG2”, we see pioneer visionary Wood innovate to the very heart of what the world has experienced as comedic/dramatic series entertainment, all while seamlessly presenting lol comedy, touching drama starring our geek-is-chic team of “DougDoug” and “Raymond”. The art and artist to watch above all.

We at Burning Shorts enjoyed some time with Xin Sarith and the EMC Monkeys, watching practices and sharing social time. In the year since we first presented “Urban Ninja for Hire”, Xin Sarith has grown and expanded.

Xin Sarith Azuma Phan Wuku in his own words (redacted from a longer essay):

“Born in the jungles of CAmbodia, i lead a peaceful life until the day rebels came and attacked my village. My family and i fled and became refugees in Thailand, minus an older brother… After buying a fake last name- PHan, we came to America.

Karma got to me once i faced a Muay Thai kick boxer. I never walked the same again. Also around this time, i fought the law and the law won.

For my 21st birthday, i went hitch hiking around middle America. After being gone for 2 months, i felt renewed. Birth of Evolved Monkey Combat! Utilizing my years of martial arts experience and being, “down with the phat beat”, I took a chance. I had a dream. I had a passion. And i wanted to share it with the world! After 3 short years of giving it my all, i produced “URBAN NINJA”.

Through suffering and hardship, sacrifice and perseverance, i am what i am today. Strong in mind, body and spirit. Confident in myself and proud of the things I’ve accomplished. I am open minded and aware of the people and things around me and although I am somewhat of an anti-hero, beneath my tough exterior lies compassion for my fellow man. I’ve learned to appreciate life and to live it the best way i possibly can.

Now you know pieces of my story. A kid who came from nothing. A kid who had a dream. A kid who gave it all but never gave up. Go be that kid. And maybe one day, i will read your story.”

There it is in the final paragraph, as clearly stated as ever expressed: the American Dream lives. And, Xin Sarith’s guide to the Dream is Eastern wisdom for the ages:

Over thirteen and a half million views and a year later, experience Xin Sarith’s “Urban Ninja for Hire” again …

This entry was posted in Burning Shorts and tagged Urban Ninja for Hire, Xin Sarith. Bookmark the permalink.